In 1852,  the Carroll property in Annapolis was conveyed to the Redemptorists from the granddaughters for $6000 under the condition that it always be consecrated to religion. The congregation moved their Novitiate immediately from downtown Baltimore. By 1856, more room was needed and a west wing was added. Two original porches on the north side and another on the east end of the Brick House were torn down in the 1850s.   Around this period, the frame house , which had fallen into disrepair, was demolished. In 1866, a wine cellar was constructed underground at the west end and a two-story wine press building constructed over it.  The formal gardens were largely converted to working use. By 1910, however, the working buildings around the property had been razed, the west porch was built and the grounds were restored to pleasure garden use.  From 1907-1968, the Carroll House served as a novitiate and center for missionary activity in the eastern United States and Canada. 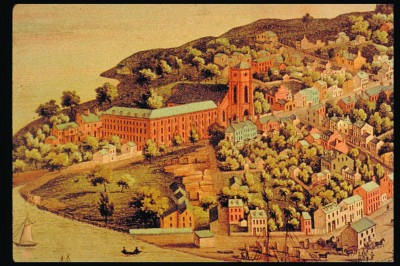